Thanks to my host mom, I spent this past weekend exploring the city of Lekeitio, which is a small, coastal town between Bilbao and San Sebastian. My host mom grew up in Lekeitio which has a population of about 7,000 people. Two of her three daughters own houses in Lekeitio as a vacation spot during the summer, because the weather during the rest of the year is not ideal. The reason my host mom decided to take me, and the student she hosted this past Spring semester, was because there was a festival celebrating the Basque public schools. There was music playing in the streets, food vendors, live entertainment, and even fireworks. This festival takes place every year at a different location, and this year it was in Lekeitio. I felt like I was in a movie – it was beautiful. 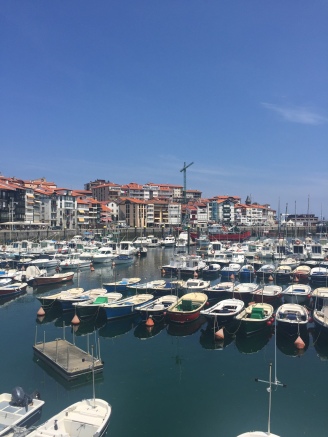 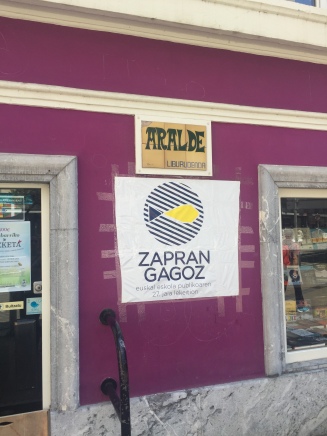 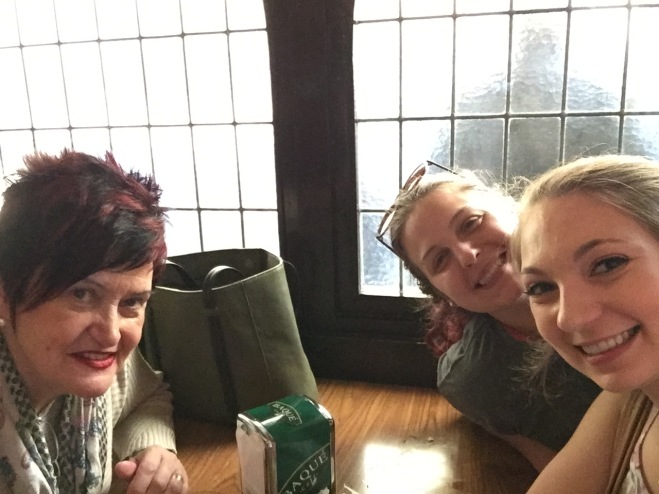 Grabbing a drink at the bars

Upon arriving in Lekeitio, the weather was the nicest it’s been so far. Pure sun and a solid 75 degree temperature. I was finally able to break out one of the five pairs of shorts I brought! We spent the afternoon soaking up the sun on the beach with cervezas. Not going to lie, I am still getting used to all the nudity on the beaches. I have seen so many naked children, and it’s starting to get to my head a little bit. Yikes. After a much needed siesta, we walked around and enjoyed the festivities as the sun set behind the mountains. My host mom’s house is located right on the water and we were able to open our windows and watch the fireworks above the local Cathedral before bed. 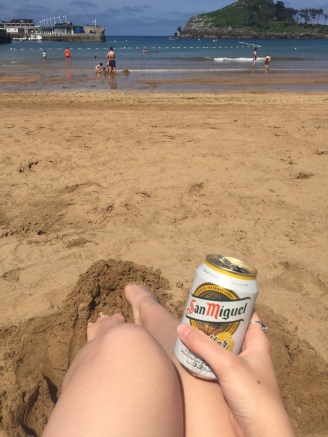 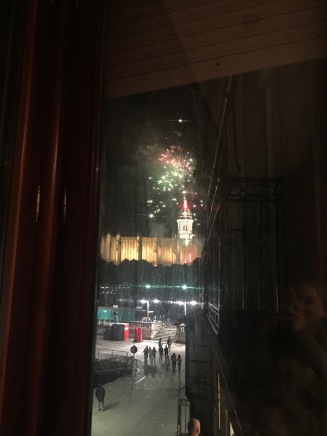 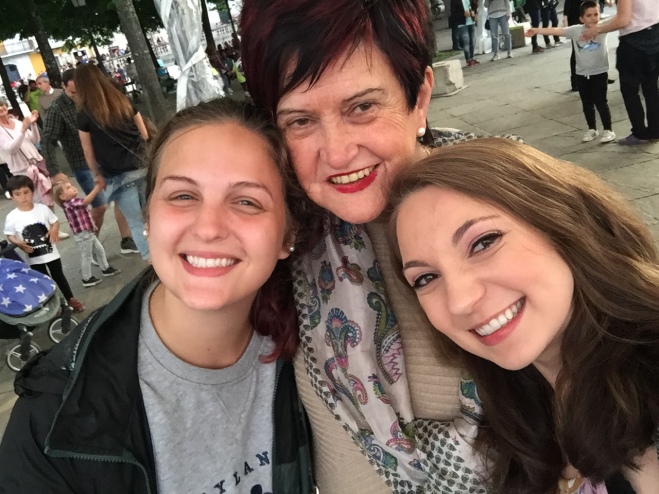 On Sunday, we all slept in until 11am. Exhaustion can really catch up to you when traveling so much. At this point there was music playing outside our windows and the fiesta had officially begun. My host mom took me to tour the only Cathedral in town, Basílica de Santa María. The details inside of the church were absolutely incredible. I started to tear up as we walked around during Communion because the intricacies were something I have never seen before. They do not make churches like that anymore in the United States. This Cathedral has so much history, and even had statues of saints behind the altar with pews to pray in front of each one. The confessionals were definitely antique and original as well. Knowing that the majority of the population here in Spain is Catholic, makes me very giddy. I love seeing all the different churches in town and being able to explore the history of my religion. It was an experience I wish my family could have seen as well. 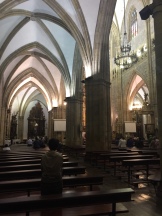 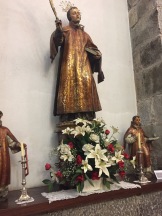 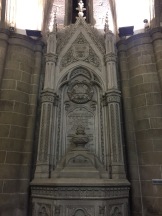 Prayer engraved in the architecture 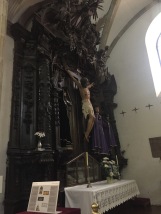 Jesus on the cross 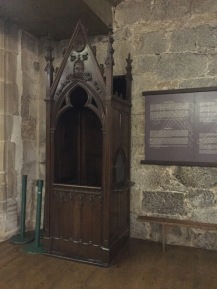 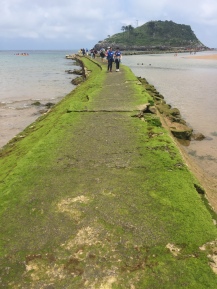 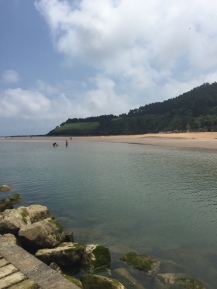 View from the top

View from the top

Lekeitio in the background

After grabbing some lunch, the girl who studied in Bilbao this past semester and I decided to hike La Isla de San Nikolas. This is an island that can only be reached during low tide. Once high tide hits, the walkway to the island is covered by the water. You have to be careful when walking to the island though, as the moss that covers the walkway is extremely slippery. I learned that one the hard way. As far as I know, the island was used as a colony for people with leprosy back in the day, but this is not definite. While hiking to the top, there were a number of archaeologists digging and chipping away at rocks trying to put together the pieces of its history. There was also a cave that looked completely man-made with sticks on the inside that must have been used to create a fire. It was unbelievable. Once we arrived at the top, I took one look out at the ocean and just thanked God. It was the most beautiful scene I had ever seen in my life. The pictures do not do it justice. Surrounded by ocean, with the seagulls soaring through the air, turning around to hear the music from the festival in the background and seeing the bright variety of colors of the houses – it was overwhelmingly beautiful. I will always have that vision ingrained in my mind. 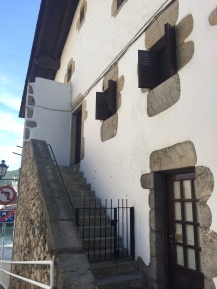 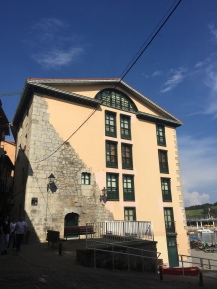 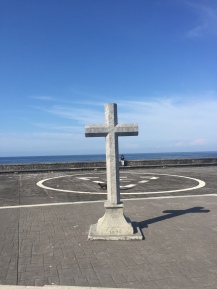 Beyond the cross is a cliff overlooking the ocean

After some local ice cream and the imminent clouds indicating rain, it was time to head back home to Getxo. Lekeitio is about an hour and a half drive from Getxo, where I am living for the time being. While driving through the mountains, I decided to take a little snooze in the car. I woke up about 20 minutes later to lightning flashes, loud thunder, and heavy rain pounding on the car windows. The road through the mountains was extremely narrow and I was already nervous because people in Spain drive reckless. They will honk whenever they feel necessary, cut you off, and speed away without taking into consideration the speed limit. I must say, my host mom was driving pretty fast in the rain with lots of sudden stops. When we reached a toll booth to go across a bridge, my host mom just turned off the car, got out and lifted the hood of the car. The car was overheating and smoke started to emerge. I had no idea what to do, or how to help. I’m not much of a car expert, but I could tell this was not good.

A man stopped to see if we needed any help, and we waited a little while for the car to cool off. Mind you, this car is very old. VERY old. My host mom needs a new car ASAP. We got back in the car, and headed off through the mountains again. Now, the windows on the inside of the car started to fog up and none of us could see out the windshield. We ended up hitting the median on the side of the road and swerved back into the lane on the freeway. Luckily, we did not hit any other cars and we are all okay, but my host mom’s car is completely scratched and dented on that side. I ended up taking the wheel from the passenger side and guided my host mom through the lane because she was swerving so much. She already does not have good eyesight, so in conjunction with the low visibility, it was a challenge. Eventually, we made it home alive and by that time, there was an immense amount of smoke and a putrid odor coming from the hood of the car. I got out and decided to walk the rest of the way home in the rain, because I did not want to risk sitting in the car. Her car is now sitting in the garage beneath our house, completely useless. I really saw my life flash before my eyes and I feel lucky to be alive to tell this story. It was quite a scare, but nonetheless it was a perfect weekend that I am thankful for. 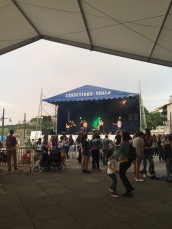 Dancing at the festival 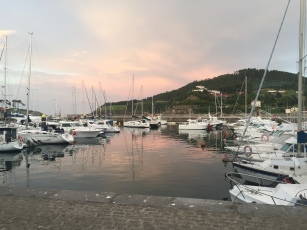 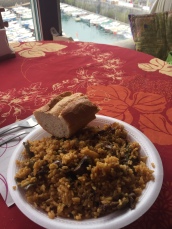 Paella at the festival

2 thoughts on “A Weekend in Lekeitio”