It has officially been one week since taking my first steps in Bilbao, Spain. I cannot begin to tell you how fast this week has gone, and all of the landmarks I’ve been able to see in such a short amount of time.

I have finally been able to get into a daily routine. I was waking up each night around  3am unable to fall back asleep due to the 9 hour time difference, but I am happy to say that I had my first full 8-hour sleep last night! I usually set an alarm to wake up each morning at 8am, eat whatever breakfast my host mom has put out for me, then walk to the metro stop around 10am in order to make it to class on time at 11am. Breakfast consists of toast with jelly, ham, bacon, crepes, a croissant and donut, or even a burger (which I had for breakfast this morning and it was delicious) with café con leche and orange juice. My house is the farthest away from the school and takes about 30 minutes to get to Downtown Bilbao. I sure learned my lesson on the first day of class. I accidentally slept in until 9:45am, got lost on my way to the metro station, and by the time I finally found it, the time was 10:45am. So yes, I was that one person who walked in 20 minutes late on the first day of class, sweating from running down the street.

My International Marketing class ends at 12:45pm and typically some of the other students and I will go walk around to find a bar with pinxtos, tour Casco Viejo, or go shopping at the 8 story department store called “El Corte Inglés.” Just imagine a Macy’s, but with 8 levels and a restaurant inside. It’s huge! I am actually guilty of already buying a bunch of cute clothes there. Great way to spend my money, I know.

After we explore some of Downtown Bilbao, I will come back to my house in Getxo to work on homework or walk by the beach. The beach is two blocks away from my house and offers incredible views of cliffs and green mountains. The surfing class also takes place in the afternoon, so those of us who are not in surfing will go watch and support everyone else if the weather permits. Lately, there have been thunderstorms and lots of rain making it hard to go out. I was taking a nap during one of the thunderstorms, and woke up to weird scratching noises coming from my closet. I opened the door and sure enough, there was Kiñu hiding from the thunder in my carry on. I must say, it was a little scary. I have never heard such loud thunder before, but wow, it was quite a light show.

Once 9pm rolls around, it’s time for dinner. I have had a variety of cuisine here, such as fish in a red sauce, pizza (no cheese or tomato sauce, more like BBQ sauce and ham which is surprisingly good), tortilla de patatas (made with egg, potatoes, and olive oil), huevos con papas fritas (eggs with french fries), chicken kabobs, and a pasta platter with ham. Every night is something different. I also get dessert with all my meals which can consist of homemade flan, gelato, or yogurt. My host mom and I will watch a gameshow called “Pasapalabra” during dinner and she’ll explain to me how the game works. Afterwards, we take the dog, Kiñu, for a walk around the neighborhood at 9:30pm. We meet up with a friend of my host mom’s and the dogs will play together in the grass. My host mom’s friend has actually been to Reno, and when I asked her if she liked it, she said “no, no me gustan los casinos.” It’s very common for people to think I live in Las Vegas whenever I say Nevada, but I quickly debunk that theory. She also asked me where my origin is from, and when I said I was Italian she agreed and laughed saying “es porque tus ojos son muy grandes y bonitos!!” That’s the second time someone here has complimented my eyes and my face in general. It’s very interesting to me because I never thought about how my facial structure could strike them as being different.

On Saturday, I visited the Guggenheim museum with a friend. I’m not much of an art junkie, but the architecture of the building and all of the artwork inside was stunning. It had an underlying theme of curvature which was a little trippy when walking through the building. It definitely made me disoriented. Most of the artwork focused on post World War II era and they even had a floor dedicated to Chinese culture. This museum has four different locations around the world in New York, Bilbao, Venice and Abu Dhabi. The architecture was designed by Frank Gehry and is integral to the success and innovation of the Basque City of Bilbao. I added some photos of the Guggenheim on the “Photos” tab as well as a link below if you want to read more about the artwork. 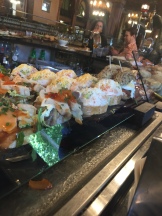 Find these in every bar 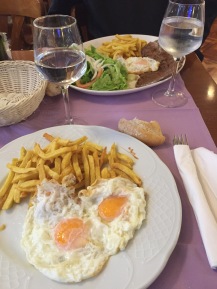 One thought on “One Week Down!”